You are here: Start > The Felsenkirche > History of the Felsenkirche
On August 23, 1482, Pope Sixtus IV (1471-1484) approved “that the old church outside the small town of Oberstein would be torn down, and a new one built in the settlement by Wirich of Daun, ruler of Falkenstein and of Oberstein…” This man of noble birth was sovereign over the imperial domain of Oberstein; he had become ruler and Count of Falkenstein in the Palatinate a few decades earlier, and he held a number of different offices in the service of other imperial and electoral princes. At the same time, he had the financial resources which were necessary for the extension of the church in Oberstein. On January 18, 1484 (that is, after fewer than 17 months), the new house of God in the rocks was already finished. The unusually short construction period supports the assumption that it was merely a conversion. In order to provide financial security for this mea­sure (“administering the churches in the service of God”), and in agreement with his adult sons and successors, Melchior and Emich, Wirich granted the church a piece of property consisting of eight individual farms in the parish of (Nieder-) Brombach in 1484. The deed of gift re­veals that “the old church of Oberstein (had already been) desecrated and the new one in the valley of the lower castle (had been) built and consecrated.”

There is one further piece of evidence for the construction of the Felsenkirche in the years 1482/1484. Among the few remnants of the original glazing, one can still see today a portrait of the donator and builder kneeling humbly and the inscription “Wiric vo(n) dune her(r) zu falkenstein und zu(m) oberstein 1482” (“Wirich of Daun, ruler of Falkenstein and of Oberstein 1482). The remaining fragments from the original glazing, which are located today in the “embrasure windows” of the roof ledge, depict the Bishop Nicholas of Myra (with his holy symbol, the three lumps of gold) as well as the coat of arms of the Count of Leiningen (three silver eagles against a blue back-ground), the lineage of the builder’s wife. 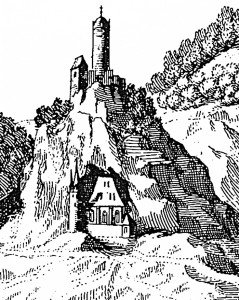 The Felsenkirche with the castle (section of a scene by M. Merians, 1654) 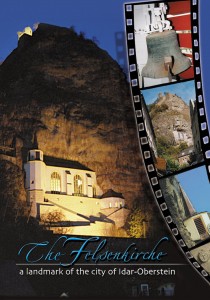 The entire article and further information about the history of the Felsenkirchen can be found in the brochure “The Felsenkirche – a landmark of the city of Idar-Oberstein” available at the church.

Pages: 1 2 3
We use cookies to ensure that we give you the best experience on our website. If you continue to use this site we will assume that you agree with it.OkRead more