You are here: Start > The Felsenkirche > History of the Felsenkirche
There is, in fact, frequent mention of a “lower castle in the valley,” and sometimes the name “the hole” turns up. “In the valley” surely refers to a location within the future city wall, and nothing would be more logical than for that location to have been in the hollow in the rocks.

Aside from this or other castle chapels, there was a church about _ km outside Oberstein’s gates in an area called “Auf dem Kreuz” (in the vicinity of the former Post Office/Müller drugstore); it is mentioned in documents from 1324, 1329, 1340, and 1382. This house of God was probably dedicated to the Saints Philip and James, Dionysius and Walpurgis. In addition, a chapel in the valley (that is, within the walled settlement) is mentioned for the first and only time in 1430, whose exact location, age, patron, and fate we do not know.

We are relatively well-informed about the construction of today’s Felsenkirche. Since the population of the settlement of (Ober-) Stein at the foot of the castle had steadily increased in the fifteenth century, it was presumably deemed necessary to enlarge the old church in the “Auf dem Kreuz” area or to build a completely new one. If one recalls that the church being used up to that point was not even in Oberstein, and that the old fortification “in the hole” was no longer needed after the construction of two more castles, it made sense to turn the building there into a church, especially since it provided relatively large construction site within the protective city walls. 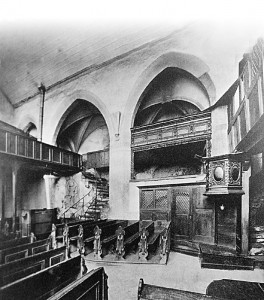 The pews built in after the rock fall in 1742 with the old ‘sovereign’s seat’, the chapel, the chancel and the ‘apostle pictures’ along the gallery.

Pages: 1 2 3
We use cookies to ensure that we give you the best experience on our website. If you continue to use this site we will assume that you agree with it.OkRead more