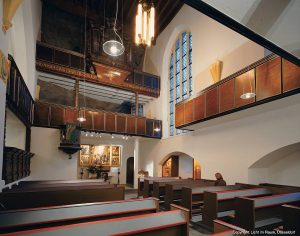 Wyrich IV. of Daun-Oberstein had it constructed in the years 1482-1484. Behind it, a wall of rocks rises steeply upwards; and under it, the houses of Oberstein nestle into the slope. On account of its prominent location, the church has become a symbol of the city. Where else is there a church that can only be entered through a tunnel which was dug into the rocks (1980-1981)?

The church’s greatest treasure is the medieval winged altar. It was created around 1400 by an unknown painter, the “Master of the Mainz Mocking”.

The viewing platform, opened in 2003, enables visitors to enjoy impressive views of Oberstein and of the Felsenkirche. 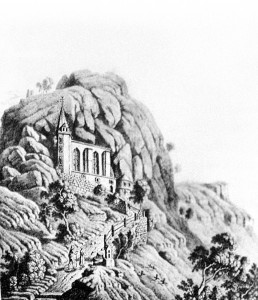 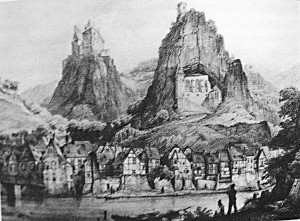 View from Oberstein towards Scheuren around 1840, the second house on the right next to the bridge is the small Catholic Walpurgis Church that was  erected by the Protestants in 1685 and was then torn down in 1855.

We use cookies to ensure that we give you the best experience on our website. If you continue to use this site we will assume that you agree with it.OkRead more